Cyber Security – ADEPT SECURE ® sets a standard in providing high levels of protecting data and integrity of computing assets belonging to and connecting to an organization’s network. Its purpose is to defend those assets against all threat actors throughout the entire life cycles of numerous cyberattacks. 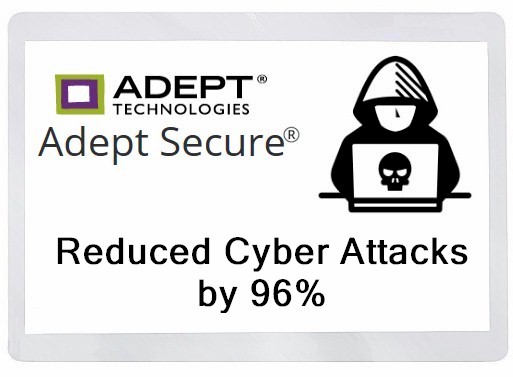 Adept’s Secure Security Solution – Data Breaches and attacks are an increasing threat to every computerized system which also faces the prospect of severe impact on their branding and reputation due to increased negative sentiment driven by media news of successful cyberattacks.

A majority of cyber security experts agree that mitigating reputational risk is crucial to any business and that managing IT Security plays a major role in these efforts, along with the obvious loss of Intellectual property, money, insurance, and other value.

ADEPT SECURE ® Reduced Cyberattacks by 96%. By implementing ADEPT SECURE ® on high target Power Company and Government systems they have reported to us a staggering 96% reduction in cyberattacks.

We believe that once the attacking systems realized they are being tracked, blocked, recorded, watched, they move on to easier targets. It is like parking your car and locking it in a very bad neighborhood at night.

You have billions of bad guys attempting to open the door, see its locked and move on to the next parked car. Then you get the millions that have dealer set keys that try every attempt to open the lock on the door, none of their keys work because the door lock disappears. Then you get the thousands that attempt to break the car windows, they move on because the whole car disappears.

All the attackers are on security cameras and photos of them all have been recorded are shared with other car owners and law enforcement.

The bad guys that have Harry Potter’s Cloak of Invisibility on, that is make believe, you think your IP address is spoofed, nothing is truly invisibility on the internet.

“As we get more results, and more attack data, the overwhelming tasks of dealing with numerous cyberattacks have become more manageable with ADEPT SECURE ®, and you sleep a lot better” says Nicholas Cordua, Chief Technology Officer of Adept Technologies Inc.