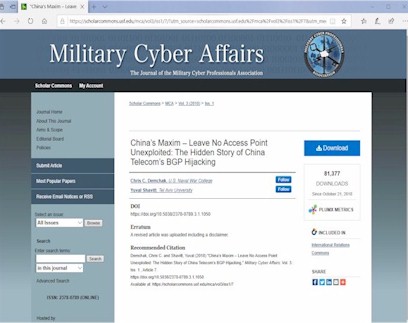 Click the image above to go to the paper

This necessitated new ways to get information while still technically adhering to the agreement. Since the agreement only covered military activities, Chinese corporate state champions could be tasked with taking up the slack. But even Chinese multinationals, such as Huawei or ZTE, were already being viewed with suspicion. Instead data suggests the government opted to leverage a seemingly innocuous player – one that is normally viewed as a passive service provider – to target the foundational infrastructure of the internet to bypass the agreement, avoid detection, and provide the necessary access to information.

Enter China Telecom3 – a large state champion telecommunications company – as an option. While the 2015 agreement prohibited direct attacks on computer networks, it did nothing to prevent the hijacking of the vital internet backbone of western countries.

Conveniently, China Telecom has ten strategically placed, Chinese controlled internet ‘points of presence’4 (PoPs) across the internet backbone of North America. Vast rewards can be reaped from the hijacking, diverting, and then copying of information-rich traffic going into or crossing the United States and Canada – often unnoticed and then delivered with only small delays.

This essay will show how this hijacking works, and how China Telecom seems to employ its distributed points of presence (PoPs) in western democracies’ telecommunications systems to selectively redirect internet traffic through China. It will show the observed routing paths, give a summary of how one hijacks parts of the internet by inserting these nodes, and outline the major security implications.

These Chinese PoPs are found all over the world including Europe and Asia. The prevalence of – and demonstrated ease with which – one can simply redirect and copy data by controlling key transit nodes buried in a nation’s infrastructure requires an urgent policy response. To that end, we recommend an ‘Access Reciprocity’ strategy for vulnerable democracies – one that is

We at Adept Technologies recommend that all Cyber Professionals read this paper.