The Adept Mobile software was written in C++, with a Mobile SQL database or a Sybase Mobile database. Sybase convinced us to use their Mobile database in 2002 at a CTIA wireless conference, and it was a lot of fun being convinced.

Remember the Apple iPhone didn’t come out until January 9, 2007. We had hundreds of inspectors in the field using this technology with our partners Sprint and Verizon data plans starting in 2003. Four years before any amazing mobile systems existed. 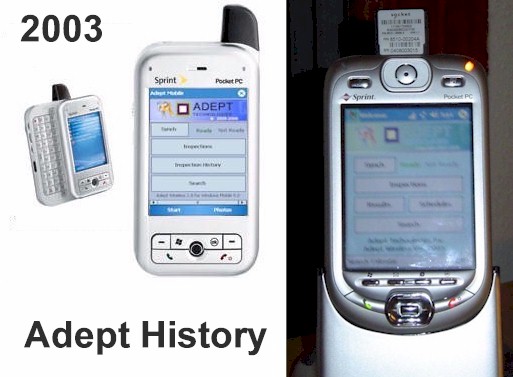 The Adept Enterprise Mobile 2003 technology was synchronization-based databases with each mobile device having its own database with data that focused only on the inspector’s area of expertise and area of where the inspections take place. Remember the internet back then was still dial up (American Online) in most areas, ISDN was also in most government offices, T1 if your lucky, there was no super-fast always on internet like we take for granted today especially on the mobile networks.

However, we made it work, and it worked very well and very fast. The only issues we had was when a device was lost or stolen, or if someone ran out of minutes based on their plan. Yes, internet Cellular access was based on minutes back then. The C++ code was solid. The synchronization was outstanding, we never had any corrupt data.

We also made it easy that the Adept Mobile system would auto-sense its Wi-Fi/WiMAX connection, or a special cellular connection provided to the government by Sprint or Verizon, and it would auto-synch, thus saving a step if the inspector forgot to click the synch button.

These days of uncertainty you must have software systems that can leverage everything and be bullet proof. I see to many governments going down the vaporware ERP paths and its sad to see all the failed projects by other vendors and the legal lawsuits that follow. If it sounds too good to be true, it is and throwing millions and millions of tax dollars at it will not solve your problem.

So remember your history especially in technology, write your own code, do not outsource, solve problems with code. It is an amazing life to be a C++ and Visual Basic developer, with master database skills. Only imagine what we are working on today.

Windows Mobile is a discontinued family of mobile operating systems developed by Microsoft for smartphones and personal digital assistants.

Its origin dated back to Windows CE in 1996, though Windows Mobile itself first appeared in 2000 as Pocket PC 2000 which ran on Pocket PC PDAs.

It was renamed “Windows Mobile” in 2003, at which point it came in several versions (similar to the desktop versions of Windows) and was aimed at business and enterprise consumers. When initially released in the mid-2000s, it was to be the portable equivalent of what Windows desktop OS was: a major force in the then-emerging mobile/portable areas.

Contact us today toll free 1-888-392-9623 to find out more on how Adept Technologies can save you money by utilizing our services and software technology.

DDoS, web application, bot, and other attacks have surged exponentially compared to the first half […]